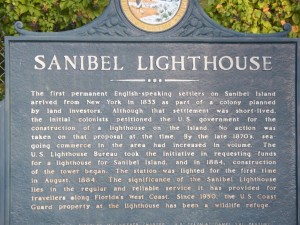 The first permanent English-speaking settlers on Sanibel Island arrived from New York in 1833 as part of a colony planned by land investors. Although that settlement was short-lived, the initial colonists petitioned the U.S. government for the construction of a lighthouse on the island. No action was taken on that proposal at the time. By the late 1870’s, sea-going commerce in the area had increased in volume. The U.S. Lighthouse Bureau took the initiative in requesting funds for a lighthouse for Sanibel Island, and in 1884, construction of the tower began. The station was lighted for the first time in August, 1884. The significance of the Sanibel Lighthouse lies in the regular and reliable service it has provided for travellers along Florida’s West Coast. Since 1950, the U.S. Coast Guard property at the lighthouse has been a wildlife refuge.

Check out these Sanibel Island attractions: